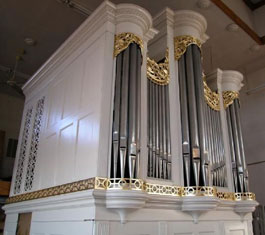 Search the Tannenberg Collection in the archives of the Moravian Music Foundation.

A very fine listing of organs and their history (by Philip T. D. Cooper, organist and organ historian) may be found at: davidtannenberg.com

The 1804 Tannenberg organ in York, PA
is featured on a PIPE DREAMS show on American Public Media:
American Pioneers

Follow the LINK and click on “1946 Hour 1” to hear some Billings and then David Moritz Michael on the Tannenberg, played by E. Power Biggs.

Historic Winston-Salem, NC is home to two restored 18th century American-made organs by David Tannenberg. Beginning with Bethabara (1753), the Moravians settled a tract of land in North Carolina, named it Wachovia, and proceeded to build the towns of Bethania (1759), and Salem (1766). The first pipe organ arrived in 1762.

For more about Moravian organs and the story of the journey of organs from Pennsylvania to North Carolina, please consider Organs in the Wilderness by Charles Vardell, available online from MMF.

David Tannenberg, the organ builder was a German-speaking immigrant who lived most of his life in the small Moravian town of Lititz, Pennsylvania. He had no formal training in organ building; instead he learned his profession by working with an experienced organ builder, Johann Gottlob Klemm, also a German-speaking immigrant. Tannenberg learned his profession well, building or helping to build nearly fifty organs in six states and with such excellence that his surviving organs are highly prized today—as the careful renovation of the organ built in 1799/1800 for the Moravian Church in Salem attests.

The first organ that Tannenberg built for Salem was in 1798 for the Gemeinhaus (congregation house), a building that served many functions, including the worship space for the town. This one manual organ was installed by Philip Bachmann, Tannenberg’s son-in-law. This organ now resides in the Single Brothers’ House in Salem.

While Bachmann was in Salem in 1798, there were discussions with him and with Tannenberg via letter about ordering a new, large organ from Tannenberg for Salem’s new church, then in the planning stages. It was decided to have an organ with two manuals and pedals. Ground was broken for the church by the end of May 1798 and the next month, on June 12th, the cornerstone was set. The following year, in November 1799, Philip Bachmann returned to Salem with one of the windchests and other parts of the organ. Bachmann worked with cabinetmakers, blacksmiths and other Salem craftsmen to complete and install the organ.

Website for Lititz music research and concerts of the Lititz Collegium Musicum (including the 1787 Tannenberg), Jeff Gemmell, Organist and Director.

Three of the seven pipe organs owned by the Lititz Moravian Congregation are still in use and listed below. The 1787 Tannenberg was installed when the present sanctuary was consecrated. Ninety-two years later, in 1879, a Hook and Hastings organ replaced the Tannenberg.

Tannenberg completed the building of an organ for Lititz Moravian Church – his own church – in the summer of 1787. It was dedicated along with the new church building on August 13. It was placed in the west gallery with two wedge-shaped bellows in the attic above the organ. – Philip T. D. Cooper

The smaller of the two Tannenberg organs now located at Lititz Moravian Church was originally constructed for the Moravian Chapel in Graceham, Frederick County, Maryland. Tannenberg arrived there with the organ on April 25, 1793, and it was played for the first time on May 4. The organ was used continuously until 1957 when it was given to the Lititz Moravian Church and was set up in the Single Brothers’ House. The organ is completely original. It was reconditioned by James R. McFarland in 1984. – Philip T. D. Cooper

More details of the Tannenberg organs at Lititz, PA, may be found at http://lititzmoravian.org/Content.aspx?ID=109

Give Now
Timeline of the Transition

The current plan (subject to change and adjustments, of course) is shared here, and will be updated.

2. The Board conducted a search and accepted many applications for Executive Director.

3. Finalists were interviewed, gave presentations, and two have been hired by the Board.

4. A new Executive Director has been named, Bruce Earnest, and will be in the office in Winston-Salem on Aug. 15.

5. A Director of Programming and Resident Musicologist was also hired, Christopher Ogburn, and will be in the office in Winston-Salem on Aug. 15.

5. An interim Assistant in Bethlehem has been hired, Jan Harke, and will overlap with the current Asst. Director in Bethlehem.
This position will be 2-days a week to finish out the 2022 calendar year, while the new Director considers applicants for the Bethlehem position.

The RISM Catalog of Musical Sources contains over 1.2 million records and can be searched at no cost. Early western music from 1600 through to the early 19th century is included.    https://rism.info/de/search.html

…however, you must make an appointment to visit the BETHLEHEM office in-person. Masks, distancing, and limits of occupancy are mandated.